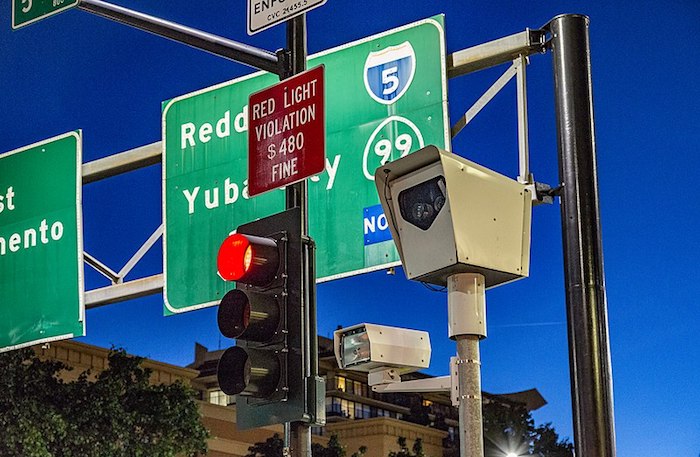 For a number of years, traffic stop law enforcement, in the form of photo enforcement, has been at the center of a heated national debate, and it has nearly everyone “seeing red” over the matter.

More than 500 communities in the U.S. have had some type of red light or speed camera program set up to catch motorists who disobey local traffic laws. There are other municipalities who are either looking into starting to use them, or expanding their existing program.

But now, there are a growing number of areas who are starting to question whether the speed camera programs are effective. In fact, critics even call them unconstitutional.

A growing number of states, are considering legislation to prohibit red light and speed camera use. They say those programs, which have grown in popularity the past few years, are becoming ripe for abuse.

If you haven’t been the “lucky recipient” of red light camera ticket, the way these cameras operate appears to be straightforward; if a driver is caught running, turning on, or in some cases even landing on an intersection line during a red light, the camera will snap a picture of the car and its driver. The “accused” will then receive a citation in the mail.

The problems with this process are many, like image interpretation, errors and context. The bigger concern is when you factor in “for-profit” revenue into the equation, it presents a myriad of opportunities for fraud and abuse.

This is one side of the argument.

Then there are those in favor of red light cameras, claiming they save lives. They feel municipalities should be “embracing them,” not getting rid of them.

Executive director of Red Means Stop Traffic Safety Alliance, Barbara Hoffman, joined the company after her son was killed at an intersection after a driver ran a red light. She believes these cameras are important in helping law enforcement officers keep the streets safe.

“Since my son was killed by a red light runner, I thought if there was more of these, maybe less people would be running red lights,” said Hoffman.

The constitutionality of automated enforcement laws has been challenged in several cities throughout the U.S., but few challenges have been successful overall. Surprisingly, the total number of camera programs has been steadily declining since 2012 because many programs have been discontinued. The main reasons for turning off cameras include a reduction in camera citations, difficulty paying for it and community opposition.

“I think everyone in the country should be concerned about this type of law enforcement action, especially when it’s so ripe with corruption,” stated Grantham.

In one case in Arizona in 2016, a former traffic light enforcement camera vendor was sentenced to prison for bribery and fraud.

According to Grantham, “the practice of privatizing law enforcement actions is just wrong. Every aspect of it is wrong. When you add the equation of for-profit into the mix, it presents a lot of opportunity for fraud, for abuse.”

If passed, Grantham’s bill would get rid of every one of the cameras in his state of Arizona. It’s already passed through committee and up for vote on the state House floor.

“The way photo radar works, it really does not afford the person receiving the ticket the right to due process,” Grantham said. “That is a huge problem.”

Then there is Paul Bender, a professor of constitutional law and dean emeritus at Sandra Day O’Connor College of Law at Arizona State University. He’s argued a number of cases about the Constitution in courts, including the Supreme Court, and believes the red light cameras are constitutionally sound, but having non-law enforcement officials issuing traffic tickets could be a problem.

Bender states, “You’re allowed to enforce criminal law in a way that’s efficient and this is just a way that it’s efficient. So, I just don’t see why there’s a constitutional problem, except if he’s saying the police ought to be more involved in the issuing the tickets. That, I think, is a plausible constitutional question.” He further continues, “the government should not contract out things that it has the responsibility for.” But, adds, “that can easily be resolved by having a police officer involved.”

Along with the constitutional debate, there’s the big question of what makes intersections safer. Studies support both sides of the debate.

Studies in Oxnard, California, and Fairfax, Virginia, reported reductions in red-light violation rates of about 40 percent after the introduction of red-light cameras. Some studies have shown that while red-light cameras reduce front-into-side collisions and overall injury crashes, they can increase rear-end crashes. But such crashes tend to be much less severe than front-into-side crashes, so the net effect is said to be positive, studies show.

Bender also said, “there is little room to dispute a camera proving that someone broke the law. I don’t think you have a right (to evade the law). As long as it’s done properly and fairly, it’s OK to enforce the law. I think cameras are probably fairer overall than individual police officers.”

But Rep. Grantham explains the third-party companies are holding too much data about motorists and should not be upholding laws. He states, “we start infringing on people’s constitutional rights and we start privatizing law enforcement to the point where you could be issued a fine,” you could potentially have your driving privileges revoked when a private corporation, who’s really going unchecked by many law enforcement in many instances, is able to just issue these tickets - program the equipment that has used these tickets, harvest your data, distribute your data for whatever purposes they see necessary, it’s very problematic.”

Fines for running red lights generally run around $100, with California having the nation’s highest red light fine at $490 per violation. Florida drivers who were caught by red light cameras paid more than $100 million in traffic fines last year. But whether the cameras made Florida’s roads safer, or just swelled state and city coffers, is an open question. Chicago has made an estimated $600 million in red light camera fines since 2004, generating over $54 million in revenue in 2017 in this city alone. Much of this revenue is redirected toward the cost of implementing and maintaining these programs and equipment.

The constitutionality argument posits that these laws and programs somehow reverse the presumption of innocence and deprive drivers of the fundamental right to confront their accusers. A 2013 New York Supreme Court decision held that that red light camera laws which imposed monetary liability on vehicle owners that ran red lights were constitutional. Krieger v. City of Rochester, 978 N.Y.S.2d 588 (Sup. Ct. 2013). The court ruled that in order to find a statute authorizing such a program unconstitutional as violation of due process, one must overcome the exceedingly strong presumption of constitutionality and prove beyond a reasonable doubt that a contested law does not have a rational relationship to a legitimate government interest.

The Florida Court of Appeals announced in 2014 that the city of Hollywood improperly outsourced its statutory obligation to issue uniform traffic citations for red light camera violations to a for-profit vendor. City of Hollywood v. Arem, 154 So.3d 359 (Fla. Dist. Ct. App. 2014). However, in 2018, that decision was criticized and disapproved of by the Florida Supreme Court. Jimenez v. State, 246 So.3d 219 (Fla. 2018), the high court held that the Florida statute on red-light cameras authorizes a local government to contract with a private third-party vendor to review and sort information from the camera.

Chicago has one of the largest systems of red light cameras in the country, and in 2017, approved a settlement of nearly $40 million paid to nearly 400,000 drivers after a previous class-action alleged that the program had violated 1.2 million motorists’ due process rights because of unfair ticket notice practices. The key in that case was that the city was ignoring its own ordinances and rules by failing to give violators a “second notice of violation” before guilt can be determined. Late-paid fines were often doubled, far in excess of what was allowed by law.

On September 17, 2018, a group of drivers filed a class-action arguing that Chicago’s red light camera system failed to satisfy a number of state law requirements. Both city ordinances and state statute required notices to violators to contain certain information including an affirmation of evidence of the violation and a warning that not responding is an admission of guilt. The suit claimed the program constitutes an “unconstitutional” and “unlawful” violation of state law and is asking for injunctive relief preventing the enforcement of any future red light camera violation notices.

Running a red light has even become political, with some factions arguing they target certain demographics more than others.

In 2012, 540 cities were operating red light camera programs. Today, only 421 cities are doing so. Municipalities that have dropped their programs cite a number of issues in making their decision, including whether the programs encourage safe driving and deter running red lights, difficulties in and/or challenges to enforcing violations, and ticket notification problems. The decline of these programs is also attributable to rising costs of maintaining them, decreasing revenues, and community opposition.

Despite recent attacks on these programs, a recent national survey conducted by Public Opinion Strategies reveals that nearly 70% of law-abiding citizens support the use of red light cameras at the most dangerous intersections in their states. Only 29% oppose them.

The argument against red light cameras is that they really offer little in the way of public safety, and primarily serve as reliable revenue sources for local officials. Consumer advocates argue that municipalities should discontinue their red light camera programs, which have for too long “burdened” motorists, without making them safer. This argument makes little sense when you consider that the only motorists who are truly “burdened” are those whose lives and families are shattered by others who violate traffic laws.

Our trained staff is standing by, and ready to help!